For the first time ever, in England, the alphorn was featured with special dedicated sessions and talks during the day for players and enthusiasts alike. The workshops and talks were led by Frances Jones (Amazing Alphorn) and Helen and Neil Grundy (Holcombe Duo). Performances given by Frances, Helen and Neil were enthusiastically received in both the afternoon recital and evening concert, which took place in the Djanagly Recital Hall, Nottingham University.

Holcombe Duo played an original composition for Mr and Mrs Jonathan Grundy when they arrived at their wedding reception. 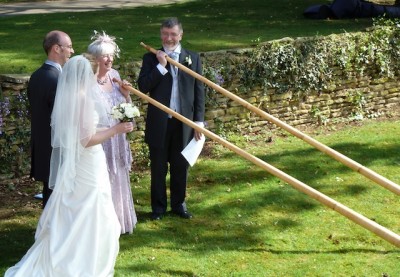 ‘Upon arrival all were greeted by the highly appropriate musical talents of team supporters and friends Neil and Helen Grundy (The Holcombe Duo) who serenaded all with their Alphorn playing (Fantastic)’ http://www.youtube.com/watch?v=4UHum_KJSS8

Lunch and demonstration with Bolton Rotarians at Smithills restaurant, Bolton. A donation of £50 was made to our charity ‘Bolton Mountain Rescue’.

Holcombe Duo performed ‘Uf d’r Aeugstere’ offstage from opposite sides of the hall. This was followed by a performance of the Alphorn Ballad by Dennis Armitage with the Bolton Symphony Orchestra, conducted by Robert Chasey.

Holcombe Duo performed in the grounds of the church as visitors arrived for the annual Flower Festival.

August 3rd – August 23rd. Visit to the Bernese Oberland and Koblenz, on the Rhine.