The Holcombe Alphorn Duo with jodel duo “Satteli” will perform a programme of Swiss Folk Music. The concert starts at 12:30 and will last for approximately one hour.

The Holcombe Alphorn Duo will perform traditional Swiss alphorn music during the day on Saturday May 12th 11am – 5pm.

This event in 2011 was attended by over 5000 people. True community event supported by Bolton Council with over 30 local charities, groups and organisations raising funds. Helen and Neil will be collecting for their nominated charity, Bolton Mountain Rescue.

from the Bolton Mountain Rescue News:

Our fantastic supporters and friends , known as the ‘Holcombe Duo’ have yet again raised a another appreciated donation for the team
Our superb and very valued team supporters and friends, The Holcombe Duo, aka Neil & Helen Grundy of Tottington, Alphorn Players, were engaged recently to play at Bromley Cross Fair on Saturday 12th May 2012. They collected £29+ in their Bolton MRT collecting tin and donated a further £100.00 to the team, which was very kindly and very supportively provided out of their appearance fee. This £129.00 raised follows a recent donation of £110.58 collected for Bolton MRT from their alphorn playing at Jumbles Reservoir over last summer. This brings the grand total collected for the Team since they started very kindly supporting us in 2007 to over £1,173.00.

From Dilwyn, organiser of the concert:

We would like to express our thanks to you for helping to make last Sunday’s
concert an outstanding success Swiss folk was something new to me, and I should
think, to the majority of the audience, as well, and I was not sure what to
expect. Anyway the vocals and horn playing were memorable, and enjoyed by all.
at choir practice last night there were lots of compliments, and many were
intrigued as to how I came to know you. 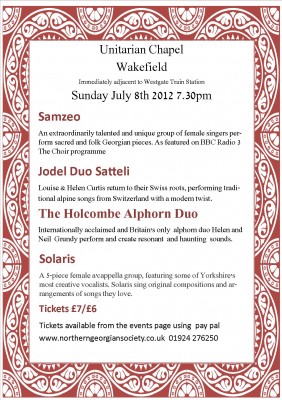